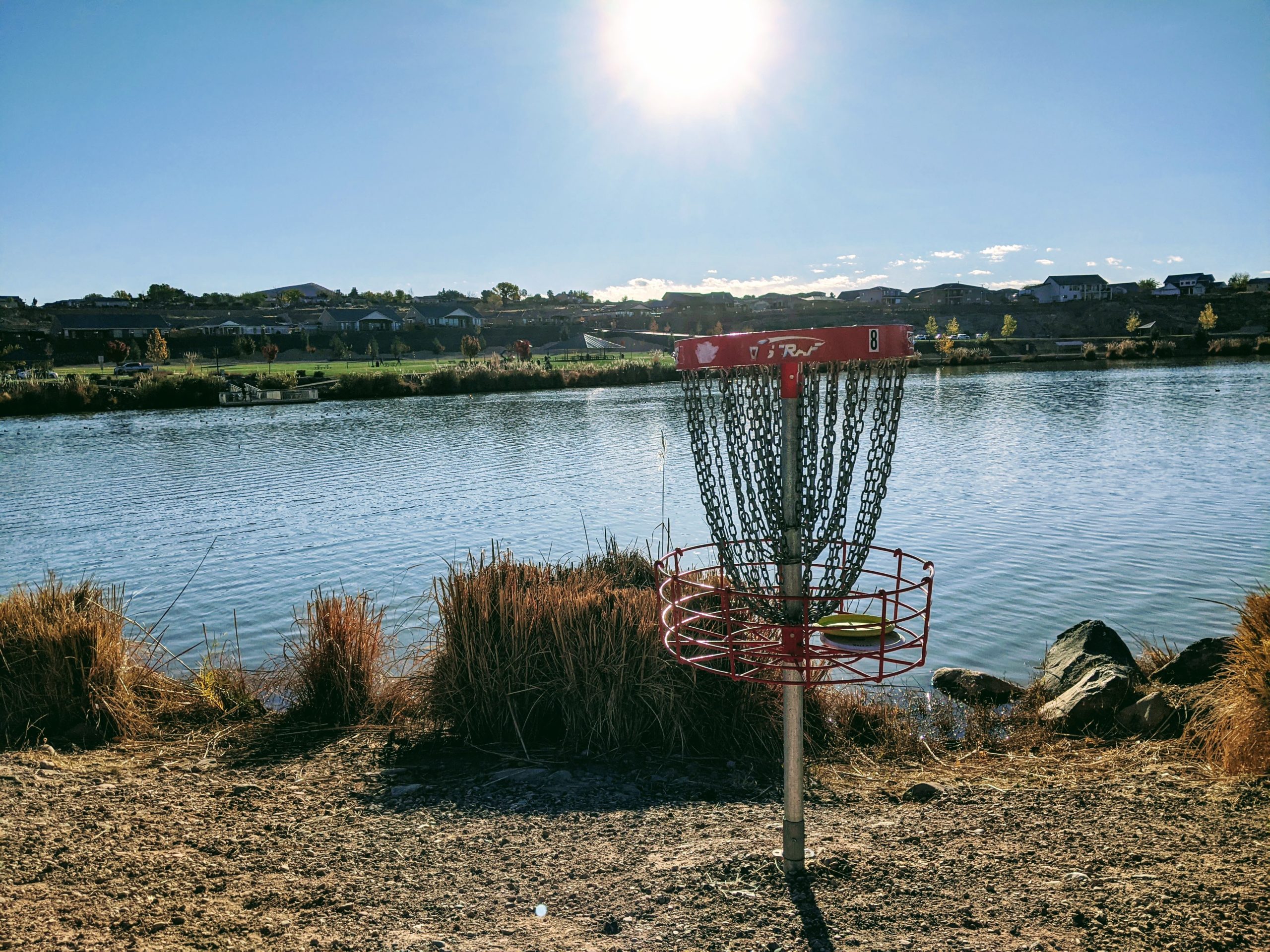 Disc Golf is primarily played in the traditional strokes format. Each throw you make counts as a stroke, and the player with the least amount of strokes thrown wins the round. You can use traditional stroke scoring when playing disc golf by yourself, with a small group of friends, as part of a league, or even during a tournament with hundreds of players.

Most recreational disc golfers only worry about the throws they make to determine their strokes. Every drive, approach shot, and putt attempt count as a stroke. In addition to the throws that you actually make during your round, one can acquire “strokes” as result of out of bounds penalties.

Out of bounds penalties add an extra degree of luck and difficulty to the disc golf round. Having out of bounds areas more readily allows for point separation among players. OB also provides the ability to gain multiple strokes on the competition on any given hole.  Sometimes

Many disc golf courses include out of bounds information on the tee signs or course maps. Even without defined OB areas, groups can easily utilize pathways, fences, roads, bodies of water, and thick vegetation areas to create out of bound areas.  In disc golf, when the disc goes out of bounds the player then takes their next throw from the spot where the disc was last in bounds. In instances where a disc goes immediately out of bounds and never returns in bounds, the OB area essentially works as a two stroke penalty.

Any time a disc golf shot goes out of bounds, a player has the option to play either from their last lie, where they threw from that went OB, or from the spot where the disc went OB. In some cases the lie where the disc goes OB is worse than the previous spot. 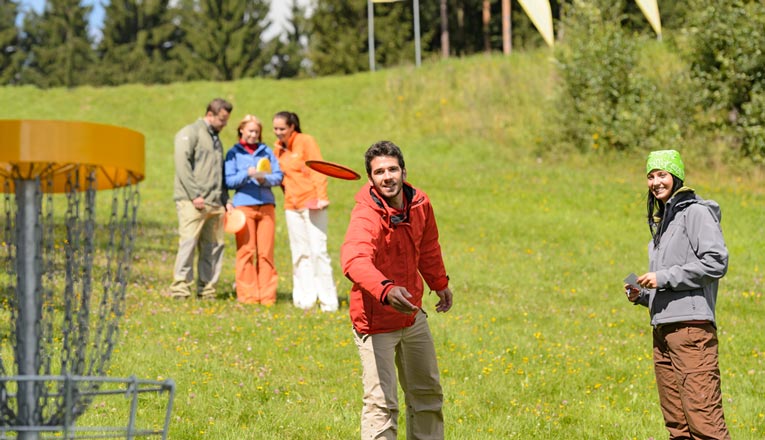 Skins is a format of disc golf where scores reset on each hole. To win a “skin” you must beat all of the other players on your card for that hole. This means you need to have a lower score than everyone else for that one particular hole. If there is no outright winner, no player with a score of one less than the competition, then the skin is “pushed” to the next hole. Each time the skin is pushed the points or amount on the line accumulate.

With skins, it doesn’t matter if you have an occasional awful hole. All that matters is that you are able to win more holes than your opponents, or even just win at times when there is more on the line.

Drama is added to a skins match when money or something else is placed on the line.  It is very common for a group of 3-5 friends to play a skins match using quarters or dollars. If a group of 4 is playing quarters, then there is one dollar on the line for each hole. If a player wins the first hole, then they receive a dollar for that hole. Each time there is a “push” an additional dollar is added to the potential pot of earnings to win the hole. For example, if the group playing pushes every hole until hole 18, the winner of the final hole would win $18.

For big time professionals the stakes and dollar value of each hole can be much higher. In this alternate shot pro doubles skins match, eight professional disc golfers play skins for big money.

Handicap is a disc golf format where instead of comparing your raw score against others scores, you play against your past averages. These past averages are used to create a “handicap” that will compare your average score against the others you play with. A Handicap levels the playing field so that even inferior disc golfers can win competitive rounds, as long as they shoot well above their average scores. Good players have a low (or no) handicap while less experienced players have large handicaps. The Handicap amount is subtracted from the actual score to determine the “handicap adjusted” score that will determine the winners.

In order to assign a player a handicap, they need to have prior history playing disc golf or else a PDGA rating.

A simple handicap formula using PDGA ratings is .09 strokes for every rating point below the best player in the group. The best player in your group would have no handicap. If the next best player had a rating 20 below that they would have a handicap of 1.8. This amount is subtracted from their total score at the end of the round. This same method can be used on a spreadsheet to calculate the handicaps of all players.

For people who don’t have PDGA ratings, you can determine a rating for them using the Infinite Disc Golf scorecard app. This app provides disc golf ratings that are similar to the PDGA ratings from playing casual rounds of disc golf.

With Disc golf doubles, two players work together as a team for one combined score. Because doubles increases the social aspect of disc golf, these formats are very popular among local leagues and clubs. There are a variety of different doubles formats listed below.

Best shot doubles is by far the most common doubles format. In best shot doubles, both players throw their disc and then choose the better of the two shots to decide where to take their next lie or throw from.

The best shot is not always the one that is closest to the pin. In many instances a shorter throw with less obstacles in the way will be determined as the “best shot.” In best shot format both teammates typically throw from the same lie each throw. If the first partner makes the putt, it is not necessary for the second teammate to also putt out.

For best shot doubles, there will usually be two or three teams on each card.

Worst shot doubles is exactly the opposite of best shot. In worst shot format your opponents decide which shot to choose. They won’t always choose the shorter throw but will often choose the disc that lands behind a tree or other obstacle making a more difficult lie. With worse shot format, OB (out of bounds) strokes can be detrimental to any chances of winning as if either player throws OB, the Out of Bounds penalty will be in effect.

For worst shot doubles there is typically two or three teams on each card.

A third format for doubles play is alternate shot doubles. With alternate shot, players alternate throws. Only one player tees off and then the partner will make the next throw. On a short par 3 course, it’s possible to have one partner drive every hole while the other partner makes all of the putts. This is the fastest format for doubles play and having five teams on the same card is not overly inconvenient. Alternative shot is a great format for a date night doubles activity.

Triples works just like doubles, the only difference is that there are three players on a team rather than just two. All three players on the same team throw and then the captain or players collectively decide which spot to throw from next.

Team or Scramble play works the same way it does in ball golf. All four players throw each shot from the best throw by any member of the team. 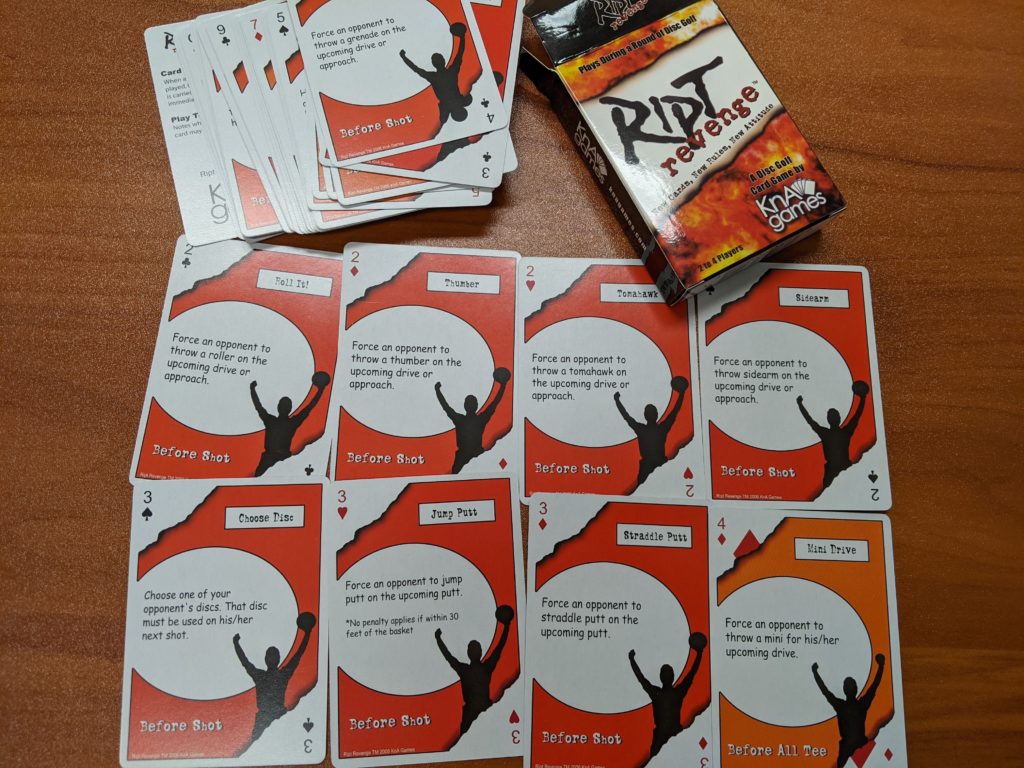 Ript Revenge is a super fun “game within the game.” In Ript Revenge you play with a deck of cards that instruct players of certain shots required or things to do. Some of the RIPT cards include actions such as:

This is a great way to “level the playing field” and add lots of diversity and laughs to your disc golf game.

While we’ve discussed some of the ways of which I’ve played disc golf, there are also many more. What are some of your favorite variations of the game that you like to play? Share your disc golf traditions and side games in the comments below!