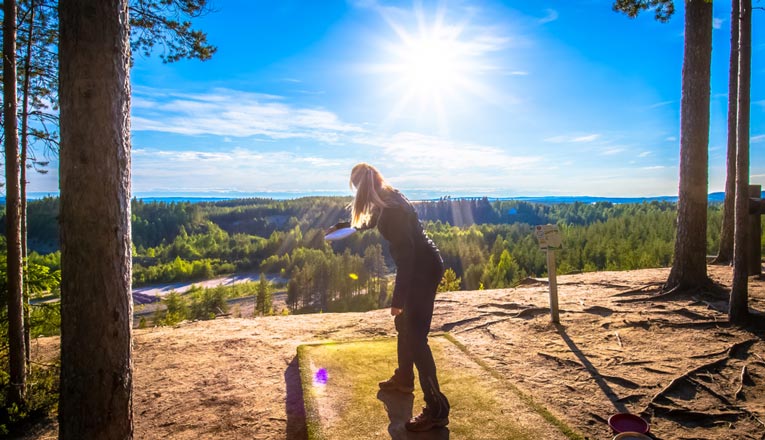 When you start playing disc golf, you realize that there are several different components and aspects to the game. Understanding the different types of throws is one of them.

Hyzer and anhyzer throws are referring to the angle of the golf disc upon release from the hand. If learning at a vast level, these throws can prove to be an invaluable asset for the advanced players.

In this post, we will discuss Hyzer vs Anhyzer golf disc throws – their main differences and how they are executed.

In Ultimate Frisbee, the terms outside-in (anhyzer) and inside-out (hyzer) are used for describing the angle of disc release.

When discs are thrown without any angle, that throw is known as flat or level.

Let’s dive deep into each of the throws and understand hyzer and anhyzer in detaili.

The inside-out throws are referred to as hyzer throws in disc golf. A hyzer throw is the most consistent throw in disc golf as a disc released on a hyzer angle has only one way to go. Unless a disc is ridiculously understable, for right handed players on backhand throws, a hyzer release will curve to and always finish left. A forehand throw at a hyzer release will always curve to and always finish to the right.

This type of throw is used on occasions when there is an obstacle like a tree blocking your approach to the basket. A hyzer throw can be used to angle the golf disc further down to create a harder angled turn to get around your obstacle.

For example: suppose you are a left-handed thrower, then you will angle the right side of the disc downward. When you release the golf disc, it will move toward the right.

How to throw a hyzer?

If you are a novice disc golfer and looking to expand your disc shot selection, then knowing how to throw a hyzer can help.

To perform a hyzer throw:

For example: suppose you are a left-handed thrower, then you will angle the right side of the disc upward. When you release the golf disc, it will move toward the left, in contradiction of the natural angle of the disc.

How to throw an anhyzer?

Throwing an anhyzer is pretty much the same as throwing a hyzer. The only difference is the angle at which the disc is held. You need to hold the golf disc in such a way that its top is facing you. You will have to adjust your wrist accordingly.

Because of the nature of disc golf discs to naturally fade, you will want to use an understable disc so that it will maintain the anhyzer angle.  An understable disc is a disc with a large negative turn rating. Understable midrange and putter discs perform best for holding the anhyzer angle all the way until the end of the flight. As a golf disc slows down in speed, it tends to “fade out” and curve the opposite direction.

To perform an anhyzer throw:

Hyzer vs Anhyzer golf disc throws – why these throws are used

Golf courses having sharp angles are tough to play on. Dogleg right and dogleg left baskets can make reaching the basket even more difficult. Using one of these throws can help you basket even with weird angle baskets.

In case, if there are obstacles in your way on a basket, hyzer throw or an anhyzer throw can be used in this situation to your advantage. Suppose there is a tree straight in front of the basket, with right wrist adjustments, you can throw the disc hyzered or anhyzered to make it reach the basket.

Newer players can maximize their disc golf distance by achieving a flex shot or “S-Curve” flight path. An overstable disc can acheive max distance with an anhyzer release. With a right hand backhand throw the disc will turn to the right during the first part of the flight and then fade back to the left at the end achieving maximum distance.

An understable disc best achieves a flex shot when thrown at a hyzer angle with enough power and snap. If you have enough power, the disc will release at the hyzer angle but then flip up to flat and then slightly to the right to an anhyzer angle before fading back slightly at the end of the flight for max distance.

After reading this post, we hope that you understand the Hyzer vs. Anhyzer difference. They are all about at what angle the disc was released. If you have any queries regarding hyzer and anhyzer throws, feel free to ask in the comments below.