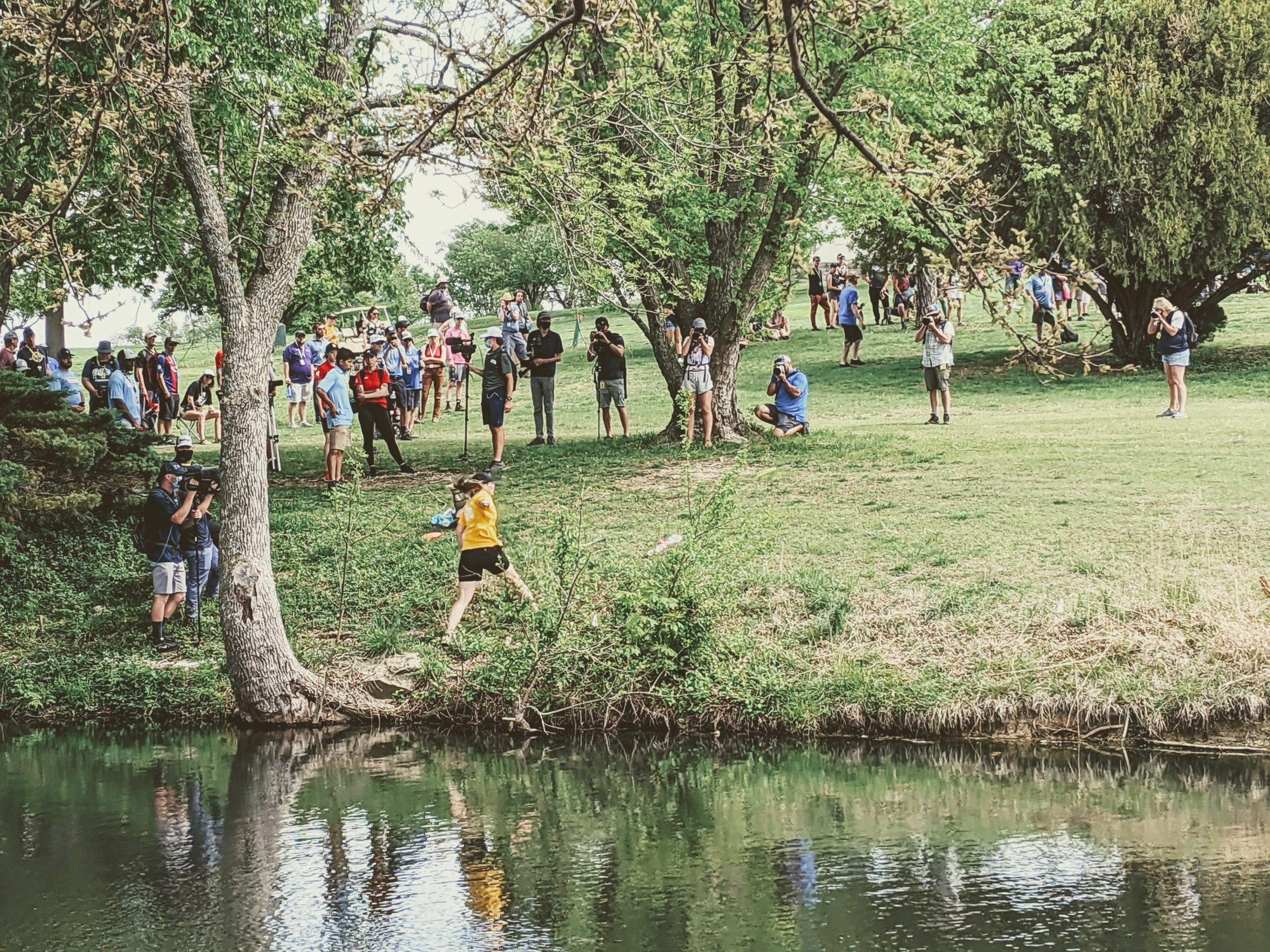 The nice thing about disc golf is that it can be as competitive, or as casual as you want. When playing casually with friends and families the only thing you need to worry about is having fun while tossing discs towards the basket.

The one thing that you want to pay attention is safety. While disc golf is a relatively safe sport, disc golf discs are heavy and sharp enough that they can cause injury to other people or property. Always make sure the area is clear before throwing and be cognizant of the surrounding areas as well in case you shank a throw.

If you want to take the game seriously, or play in organized leagues or tournaments it is important to know the rules, culture, and etiquette of the game.

Disc Golf is played like traditional “ball” golf, but with flying disc golf discs instead of balls and your arm and body instead of a clubs. One stroke is counted each time the disc is thrown and when a penalty is incurred.

The goal is to play each hole in the fewest strokes possible. The player with the lowest number of strokes at the end of the round or tournament wins.

Each hole begins with the initial drive from the tee box. Most courses have designated tee areas with signs and concrete, turf, mats, dirt, or even grass teepads. 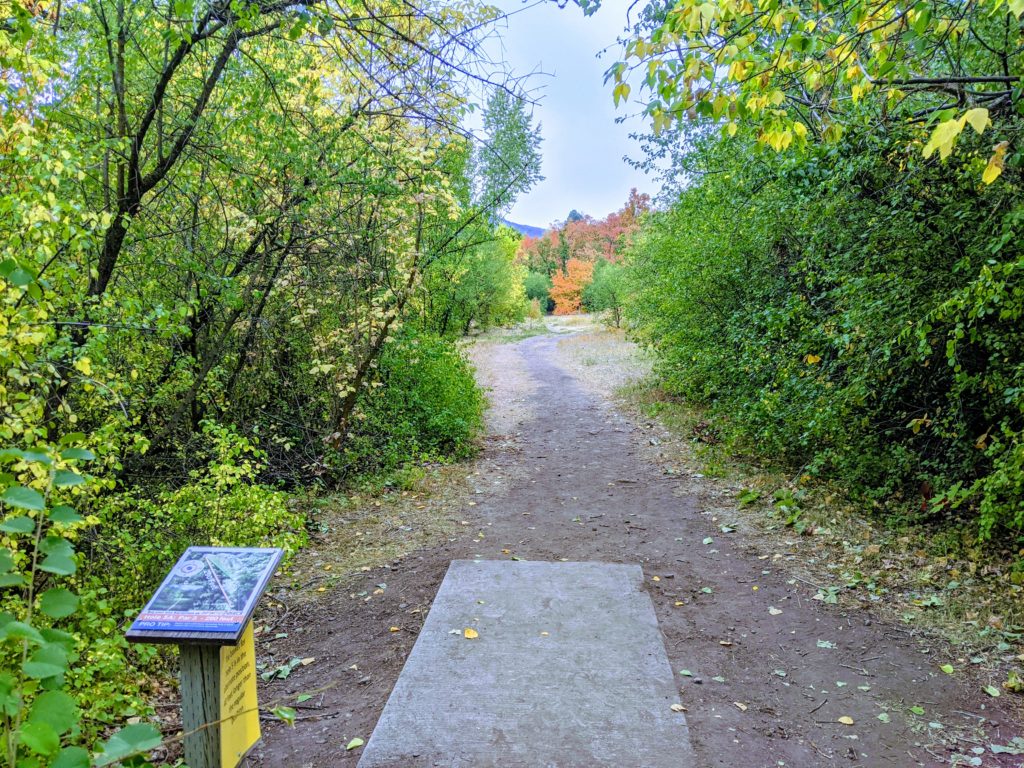 The lie is the spot where the player’s previous throw has landed. The plant foot of your subsequent throws must be within an 8×11 rectangle (the size of a standard sheet of paper) directly behind your disc or a mini marker disc.

Foot placement when throwing will require some practice, especially on long holes where you are using a full run up to make the next throw. The non plant foot can be any place you choose as long as it is no closer to the hole than the rear of the marker disc.

For throws outside of 10 meters (33 feet) you can step forward and can pass the disc or mini marker after release of the disc. For throws inside 10 meters (commonly referred to as “the circle”) you must hold balance and cannot jump or fall forward until after the disc has come to rest.

For tee areas and initial drives at tee boxes at the beginning of each hole, the player with the least amount of strokes on the previous hole is the first to tee off. After teeing off, the player whose disc is farthest from the basket throws next until all players hole out. This player is known as the one “out.”

For safety reasons, it is important that all other players stay behind the out player until after he throws before proceeding to their own disc.

In the instance of ties, throwing order remains the same. Go back as many holes as necessary to determine when one player had a better hole score than another.

The disc must come to rest in the chains or tray of the basket and cannot be on top or wedged into the side of the tray for the hole to be considered complete.

Penalty Strokes and Out of Bounds

Penalty strokes are assessed for rule violations, the most common is going out of bounds. A penalty stroke counts as a stroke even though you don’t actually have an extra throw.

When the disc goes out of bounds, take your next throw (plus the penalty stroke) from the last place that your disc was in bounds. This space is determined by a vertical aerial plane of where the disc flew over the out of bounds line.

PDGA rules also allow you to rethrow from the same spot, or take your OB lie at any spot directly behind the out of bounds spot.

All throws must be made from an “in bounds” position and you have up to a meter (three feet) in which to mark your lie for your next throwing position.

A Mandatory (mando) is an indicator that requires the disc pass through a certain aerial space. Mandos are generally used to create a more safe environment and minimize potential injury and course layout conflicts. They are typically marked by arrows on the course.

If your disc does not pass on the appropriate mando air space take your next throw, with a penalty stroke, from a drop zone which is typically right next to the mandatory arrow. 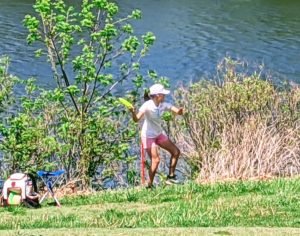 Water hazards are one of the most common out of bounds markers. Most good disc golf courses have at least some holes with water hazards. These can include ponds, streams, rivers, or lakes. When your disc is thrown in the water you treat it as a normal out of bounds and take your lie up to one meter from, or directly behind,  the last spot where it was in bounds.

Small ditches and puddles of water build up after a storm are considered “casual water” and are generally not considered out of bounds. When a throw lands in casual water you can either walk in the water and get your feet wet for the better lie, or throw directly behind the body of casual water.

A Bunker or hazard creates a different type of out of bounds rule where you take a penalty stroke but still throw from the same spot. These penalties are often used for sand traps when playing disc golf on ball golf courses.

If your disc gets stuck in a tree or thick shrubbery, it is considered an unplayable lie. The disc must be thrown from the lie on the ground, directly underneath the unplayable lie, or directly behind the bushes to avoid damage to the vegetation.

Much of disc golf etiquette is the same as used in ball golf. This is one area where disc golf has not improved on the archaic original version of the sport. Most players think they need to mentally focus without any distraction in order to make any throw or putt. For this reason, when another player is throwing you should remain still and silent.

Most casual players who are not ball golfers don’t understand this culture, but it is important to be cognisant of the customs when playing in disc golf leagues and tournaments. Sometimes other players on the course can become angry or offended if you fail to adhere to this culture of still and silent. 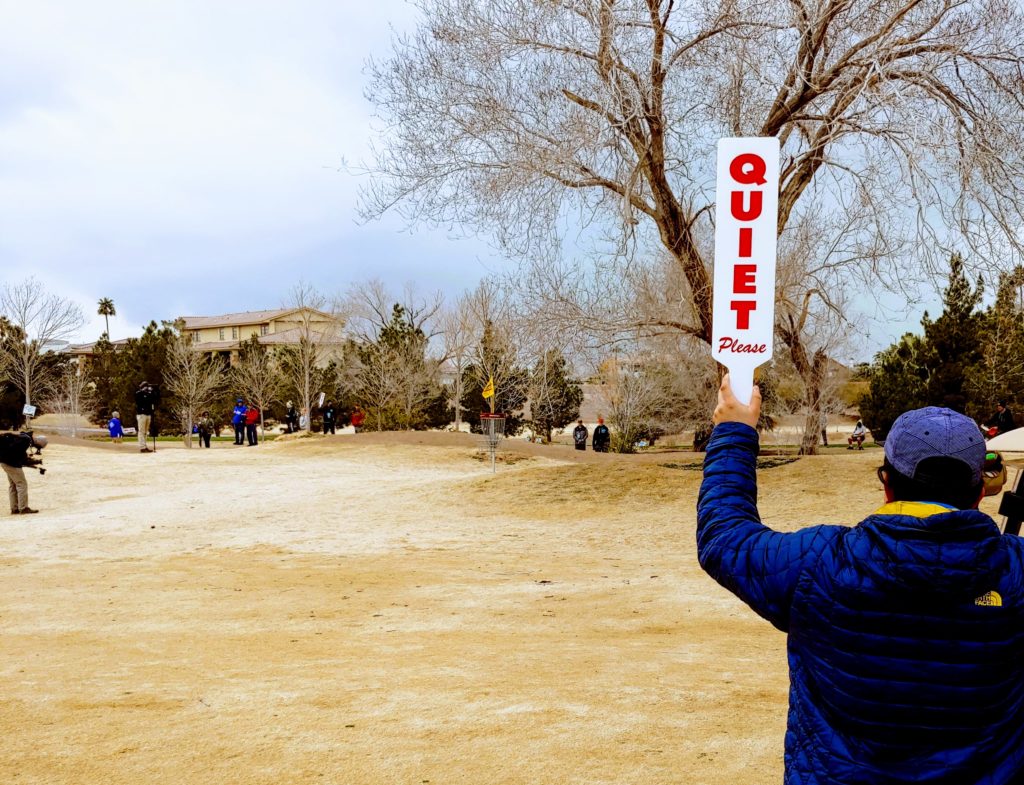 Clear Disc from the Basket

After making a putt, it is common courtesy to remove your disc from the basket before the next player putts so as to not make their putter deflect or bounce out of the basket.

The reality is that with modern disc golf baskets with deep trays it is virtually impossible for a disc to bounce off another disc out of the basket. But, a disc stuck in the chains can cause a putt that would be good to chain out. In any event, it is common courtesy to clear your disc from the basket after you make your shot, even if it is not likely that the next player will make theirs.

If you are playing at a slow pace and a player or group behind you catches you, it is common courtesy to let them “play through” so that they do not have to finish the round at your slower pace.